Standard goblins range in skin color from a reddish shade to yellow to a greenish color. They have long sharp fangs and pointy teeth.

The hierarchy of goblinoids is such (although exceptions exist):

Hobgoblins: are the smartest and most organized of the goblinoids. Almost barbaric Romulans in nature. Militaristic and warlike.

Goblins: are the most numerous of the goblinoids, average to low intelligence, although there is a feral cunning. Live in large clans of their own or among the hobgoblins as working class/slaves/bulk army. Good at creating implements of war and explosives.

Bugbears: The brutes of the goblinoids, although still fairly cunning and clever. Used as shock troops. Their natural stealth abilities allow them to strike from surprise. Exceptional bugbears are used as assassins and special ops troops. Bugbears that become filled with the spirit of Pyremius sometimes manifest arcane powers of flame and fire, and are known as Fireragers.

Nobody knows the origin of the goblinoid races. Goblins believe they are descended from humans and fiends, originally created as foot soldiers for the armies of Hell. The Great Hero-Warrior Maglubiyet lead the fight that freed them from the service of Asmodeus. Maglubiyet works as an exarch to Anshar, along with some of the other goblin demigods.

The majority of kobolds are yapping dog/rat things. There are a variety of kobold tribes, some rat-like, some lizard-like, some toad-like, some pig-like, bat-like, fish-like (MURLOCS!) etc. Most other races consider them vermin….intelligent trapsetting spiteful cowardly vermin.

Kobolds are a naturally mutative vermin species, common traits are as the standard kobolds. They are all easily discerned as kobolds, but with small minor differences and traits…the bat clans have better hearing, some radar, and occasionally one has wings. The frog ones can swim and hold their breath. The fish ones can be murlocks “mrrglrlrlrmgrrr” and Rwlrwlrwlrwl"

Most kobolds are wicked little miners, they’re the preferred miners and smiths of the subterranean races, able to squeeze every gram of ore out of the rocks and mass-produce arms and armor that, while of lower quality than the dwarves make, is of ample numbers to supply all the orcs and troglodytes and anything else who allows them to live in exchange for providing the goods.

There is a theory that kobolds are somehow related to mongrelmen.

Giants: All true giants are immortal in the same fashion as dragons. There are rare beings with extraordinary powers, while others just get tougher and meaner with age. True Giants: Hill Giant*, Stone Giant*, Frost Giant, Fire Giant, Cloud Giant, Storm Giant*

*Most common types in Alfaysia

Seareach Giants: are relatives of stone giants with black or gray hair. They have a special affinity with stone and fire. They only known area known to be populated by Seareach giants is the city of Seareach east of Landfall. The giants live there because they have lost their way from their homeland. They occasionally build stone ships and set out to sea in search of their homeland. The Seareach giants are integrity and good will personified, anyone who knows of them knows they never lie and are never evil, are always of good cheer. Perhaps their only downfall is the length of time it takes for them to make a decision, they are not a hasty people.

Stories are told of ogres—horrendous stories of brutality and savagery, cannibalism and torture. Of rape and dismemberment, and all manners of hideous murder. Those who have not encountered ogres know the stories as warnings. Those who have survived such encounters know these tales to be tame compared to the truth.

An ogre revels in the misery of others. When smaller races aren’t available to crush between meaty fists or defile in blood-red lusts of violence, they turn to each other for entertainment. Nothing is taboo in ogre society. One would think that, left to themselves, an ogre tribe would quickly tear itself apart, with only the strongest surviving in the end—yet if there is one thing ogres respect, it is family. © Paizo

Ogre Shaman
The majority of magical and religious power lies in the hands of the ogre shaman, rare spiritual leaders. These shaman are in contact with a world of spirits that most people are unaware of. The “vision” quest is how a young ogre formalizes their attachment to the spirit world.

Ogre Magi
Rare and secretive, some highly intelligent ogre shaman branch out into arcane magic, becoming what are known as ogre magi. These ogres renounce the normal structure of ogre society and live outside of the normal shaman hierarchy. These reclusive figures are both feared and respected for the magical prowess they possess.

Ogre Cleric
Occasional ogres feel the pull of direct divine power and becomes clerics of a power or deity. These clerics lose any connection to the spirit world they may have had, but acquire divine powers from their god. Not as rare as ogre magi, these uncommon clerics normally worship specific elemental powers or demons, and except for members of the cult, are normally frowned upon and disrespected by ogre society. Kenku are a race of avian humanoids that resemble crows or ravens, and often bear much of the same stigma. Though they frequently choose to live among other races in densely populated cities, their society is tight and closed, and they rarely allow others to see its inner workings. Kenku often band together in small groups to create roosts in vacant warehouses or condemned buildings, and these raucous gathering places are generally assumed to be thieves’ guilds by outsiders—an assumption that’s correct roughly half the time.

Like the crows they share physical traits with, kenkus are naturally covetous, especially of shiny or colorful items, and prone to bouts of good-natured kleptomania if they don’t carefully keep themselves in check. Vain and prideful creatures, they are easily persuaded with flattery.

Kenku culture is a mixture of rogue-like gangs or clans with a mystical/shamanistic outlook on life, led by clan elders.

STATS: Although kenku cannot fly, their residual wings allow them to glide somewhat, and assist in jumping.

There are two types of minotaurs, bestial and humanoid. The humanoid minotaurs are roughly as intelligent as humans, while the bestial ones are of more animal like intelligence and form. The bestial minotaurs roam free in forested or rocky lands, and the humanoid ones sometimes domesticate them as guard or attack animals. Bestial is of course a deadly insult to any humanoid minotaur. 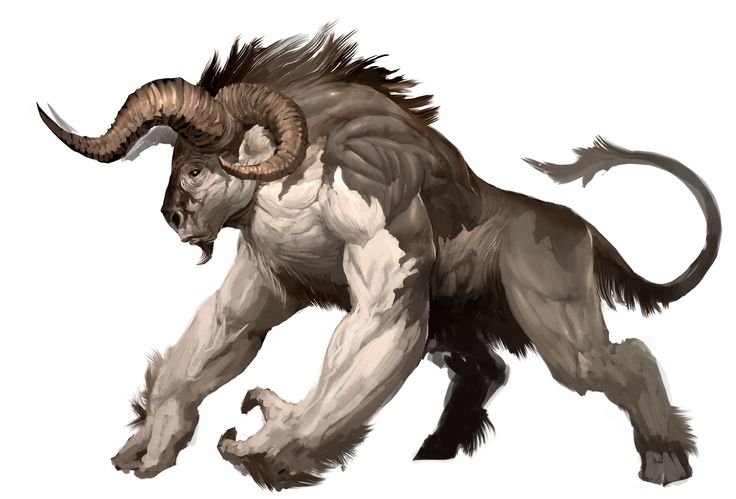